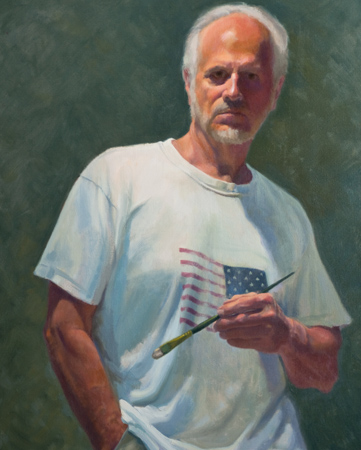 Dennis Childs Artist Statement
My most successful paintings begin with a simple abstract pattern of light and shadow. This forms the backbone or structure for my painting. I then begin the process of infusing the more literal elements into this framework. This framework gives my paintings strength and vitality. It is what draws my eye to the painting.

Dennis was born in Toronto Canada and came to the US in 1960. He attended the University of Michigan where he received his Architectural degree and then the University of Pennsylvania for Master degrees in Architecture and City Planning. After a career in Architecture it wasn’t until his early sixties that Dennis began to pursue his lifelong dream to paint. With the encouragement of his wife Linda, he enrolled in Studio Incamminati in Philadelphia in 2004 where he studied under world renowned portrait artist Nelson Shanks for four years. Dennis spends winters painting in Florida, and summers in Nantucket. His landscapes are painted enplein air and often completed in his studio. He paints both finished and sketch portraits, and although he prefers to paint his portraits from life, he occasionally paints from photographs. Dennis continues to learn from artists he admires and has taken workshops from John Osborne, Anne Blair Brown, Colin Page, Lori Putnam, Jeffrey Watts, Scott Christensen, Carolyn Anderson, Joe McGurl and Daniel Greene. He finds great inspiration in the works of Joaquin Sorolla and Nicolai Fechin. He is a member of CBAA, TASGOB, and NBAL, three Art Associations in Brevard County, Florida, and the Artists Association of Nantucket where he received the 2011 Robert C. Mc Dougall award for most promising new artist and the 2015 Pat Gardner “EnPlein Air” Award. Dennis has also won many Best of Show, First Place Oil and People’s Choice Awards in Juried Exhibitions.